My reputation is being attacked by a stalker.

I am sorry to all those effected. Sadly, she continues to escalate.

On Sept 20 2019, near the end of our brief (2 month) relationship, she went to my parents home uninvited & extremely distressed. She said she obtained their address from public tax registry docs. She had never met them before.

On Sept 26 2019, I made it clear that I did not want further contact. My family was scared.

She has since reached out to dozens of my FB and Twitter contacts, friends, family, and me 1000s of times using 50+ Burner phone #’s and social media accounts.

Because she used so many different phone numbers it was difficult, if not impossible, to block.

I am accountable to peers who I support in recovery and I worried that changing my phone # could put them at risk. I wish I had changed it earlier.

Ignoring her did not work. No matter how many times I implored her to stop, or reported her to the police, she continued - day after day, month after month, and now, year after year.

It’s hard to capture how cruel her msgs were. 1000s of unblockable msgs. It felt inescapable.

On Jan 19 2020, I snapped at her & I texted a series of similar msgs in return – It had been constant for 4 months since we broke up. I was desperate for relief.

I sunk to her level & said horrible, untrue things. I thought it would cause her to leave me, my family & friends alone.

What I said on Jan 19 2020 is unforgivable. I apologized immediately, but there’s no excuse for responding to hate with more hate. I am deeply sorry for the harm I caused in those messages.

In May 2020, after even more reports from friends of unwanted, unblockable messages, I reached out in the hope that I could improve the situation. After 3 days of her vitriol, I disengaged.

In response, she messaged local support groups and their members, spreading lies. When her forum posts violated rules & were deleted, she doxxed the admins. 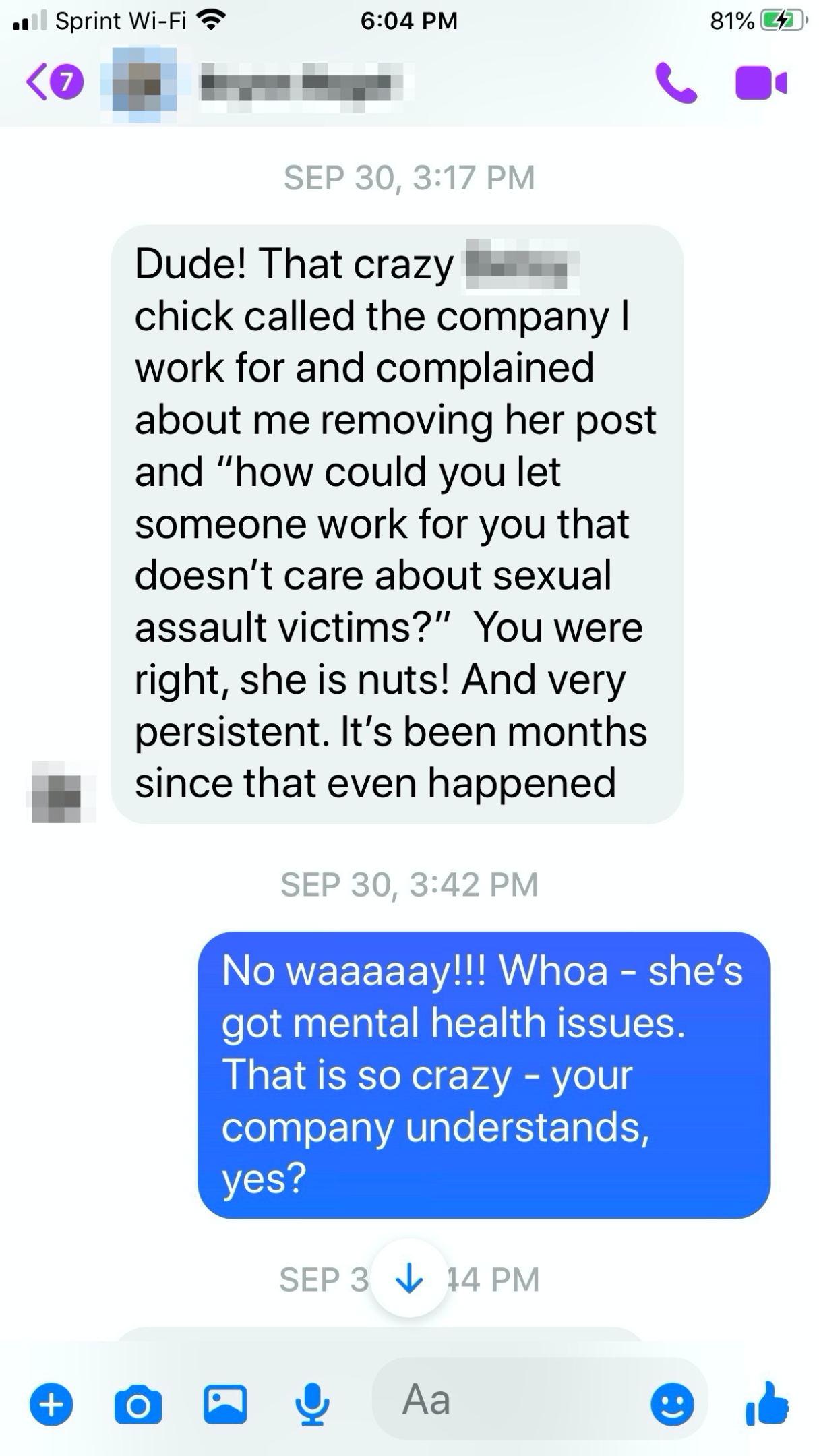 Since Nov 2020, she has taken to Twitter. She has posted the messages from that day (Jan 19 2020) to coworkers, former employers, & high-profile accounts whom I do not even know. She has blurred facts and used misleading language to gain support.

Long ago to diffuse things, I stopped using social accounts and scrubbed my internet presence.

Despite multiple reports, Google & Twitter do not remove her posts. Every time she msgs another coworker on Twitter & links to her posts, Google ranks them more highly.

I have filed multiple police reports. I am working with the harassment department, as well as toward a compassionate resolution. I wish this person no harm.

Sadly at this point, it has to be brought to light as targeted harassment.

Please, if you or anyone you know are thinking of hurting yourself, take a minute to call someone first. A good number is 800-273-8255.